I recently completed an online course with Lancaster University called “William Wordsworth: Poetry, People and Place”. It’s a free course, unless you upgrade for £29 in order to gain a certificate, and it’s open to absolutely anyone. As an avid lover of Wordsworth, I jumped at the chance of completing this course when I saw it retweeted on my timeline. I’m currently thinking about applying to Dove Cottage as a collections trainee when I graduate university, so this will look good on my CV. Even if I don’t end up doing this, at least I’ve had the opportunity to study one of my favourite poets in depth.

This week’s primary concern was introducing me to Wordsworth and his collection of poems, Lyrical Ballads, which was joint published with Samuel Taylor Coleridge. During the first section of the course, I was introduced to the team at Lancaster University, as well as the Wordsworth Trust’s Jerwood Centre, which is home to original manuscripts. Then, I watched a couple videos about the life of Wordsworth, before being tested on it.

During this first week, I had the opportunity of learning the key principles of the Preface to Lyrical Ballads. I had already studied this for my Romanticism course at LJMU, but it wasn’t thorough like this was. I analysed key phrases from the Preface – for example, I discussed the meaning of the line: “What is a poet? […] He is a man speaking to men”.

After this, I had the chance of analysing some of his poetry. I got to re-visit one of my favourites, ‘The Tables Turned’,  in addition to looking at the manuscript of ‘Old Man Travelling’. With the first poem, I had to discuss the role of nature and why it was so important to Wordsworth. With the latter, I examined how poems are created and how manuscripts help us to understand and appreciate poetry. It was very interesting looking at some of Wordsworth’s actual manuscripts; he was all over the place when composing poetry, going from the recto to the verso in order to make up his mind.

This week we focused solely on Wordsworth’s autobiographical poem, ‘The Prelude’. We began by studying the manuscript, looking at how he composed this poem on paper, constantly editing it before it was transcribed into the final edition. The main concern of this section was to question: why and how did he start working on this masterpiece? We watched videos, took quizzes and analysed parts of the poem to try and find an answer to this.

We then moved onto to thinking about the key themes of ‘The Prelude’ – e.g. childhood, memory and education. Virtually, we visited Wordsworth’s school in Hawskhead and examined how these themes connect the poem to the place; we then took a trip to Ullswater to investigate one of the poet’s most significant ‘spots of time’. Wordsworth believed one remembers their childhood through little momentary relapses, which are either frightening or fulfilling. The event, or ‘spot of time’, that we analysed was The Prelude’s boat stealing episode. We discussed the significance of it and how Wordsworth translated this optical illusion onto paper. I had to write a small 500 word essay for this, which someone else from the course peer-marked.

Lastly, we looked at how an extraordinary letter, ‘The Goslar Letter’, helped contribute to the writing of ‘The Prelude’ It was a letter Wordsworth had written to Coleridge, and it’s where you can see some of the key episodes in the poem first come in to play.

For this week, the course focused on Wordsworth’s poem ‘Michael’. Firstly, we discussed the importance of Place in the poem. By watching a video, we visited Greenhead Gill near Grasmere, which was the inspiration and setting for the poem. Through analysing the poem, looking through Dorothy’s journals, and finding connections between the words on the paper and the place, we were able to discover why Wordsworth felt the sense of Place so important.

The ‘sheepfold’ then became our main focus; we considered why this is the key poetic symbol in ‘Michael’. For this section, I had to write a small paragraph discussing the importance of the sheepfold, and what it’s meaning could represent. After this, we once again visited the Jerwood Centre to investigate Wordsworth’s writing of ‘Michael’ through various manuscripts. This allowed us to see the poet’s struggle with composing the poem in time for publication, and how it ultimately replaced Coleridge’s ‘Christabel’ in the final edition of Lyrical Ballads. Through the manuscripts, we see Wordsworth using an interleaved copy of Coleridge’s poetry to map out ‘Michael’, thus representing a violent overriding of Coleridge’s poetical potential. It was all very interesting.

For our final week we focused mainly on Dorothy’s writing and how that proved useful to William. We started off by investigating the family’s letter writing; we looked at the Christmas Eve letter and how that bears similarities with William’s later poem ‘Home at Grasmere’.

Through Dorothy’s journals we then started to think about the community in Grasmere, more importantly the Wordsworth circle (Inc. William, Dorothy, Sara and Mary Hutchinson, as well as Coleridge). We examined and questioned the importance of the “rock of names” at Dove Cottage – this is a restored block of stone which the circle carved their names into. We also dissected the meaning of naming; the circle of friends often allocated names to places that bore certain memories. We wanted to find out why this was.

Finally, we thought about Dorothy as a writer. We got the chance to look at the preserved Grasmere Journals found at the Jerwood Centre. We analysed four entries in particular, the most famous being William and Dorothy’s encounter of the daffodils in 1802. We compared Dorothy’s journal entry to Wordsworth’s “I wandered lonely as a cloud”, discussing how Wordsworth potentially used his sister’s journal to pen this poem two years later. This was a lovely ending to the course considering this was the first poem I ever read by Wordsworth.

If you’re a fan of Wordsworth, or if you know absolutely nothing about him, this course is for anyone. I’d definitely recommend signing up. Over the four weeks you’ll learn so much about the poet; you’ll become familiar with his writing process, as well as gaining an understanding on how certain themes (place, time and Nature) played such huge parts in his writing.

Thanks for reading, Lauren Xx

One thought on “My William Wordsworth Course:” 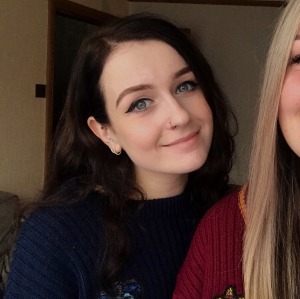