Neil Gaiman has somehow done the impossible: I actually liked a piece of children’s literature. I hardly ever read this genre, and that’s because I hate it. The characters are, understandably, childish, and the overtly simplistic language annoys me. However, this one was different. I knew I’d enjoy it because I love the movie, but I didn’t expect to like it this much. It follows Coraline, who’s recently moved to a new house. However, something seems off. It’s not the mist, or the lurking cat, nor her strange neighbours who read tea leaves and have a circus of mice. It’s the Other house; the one behind the door, home to the Other Mother and Other Father who have buttons for eyes and skin as white as paper. They wish Coraline to stay forever, and it might happen if she doesn’t get back through the door.

To begin with, I was slightly worried about how this would translate on paper. I love the movie so much, and I didn’t want the book to be a disappointment. However, I was pleasantly surprised. There were slight differences between the novel and movie (for example, despite playing a huge part in the film, Wybie wasn’t included in the novel at all), but for the most part it was the same. Occasionally, it felt like I was reading the script it was that accurate. Despite the language being simple, Gaiman used such beautiful metaphors and such sophisticated language to create this story. He has the ability to write creepy stories that are suitable for children, yet also appeal to the adult’s imagination. I think this may be a main reason why I liked it so much; it didn’t feel like I was reading a children’s novel. It was sinister and intense, yet incredibly friendly.

END_OF_DOCUMENT_TOKEN_TO_BE_REPLACED

The beginning of March was slow. I wasn’t necessarily in a reading slump, but I just didn’t feel like reading. I was overthinking a lot, meaning I couldn’t focus on the words in front of me. I also had to submit my 8,000 word dissertation, which took up a lot of my time. Thankfully, towards the middle of the month, I managed to sort myself out. I got some reading done and managed to complete my Goodreads goal (to read 30 books)!

As always, there will be reviews of the following books (except the short stories). The ones already published will be highlighted in red. Enjoy:

Thomas Hardy’s The Woodlanders | 3 out of 5 stars:

I just don’t think it was the right time for me to read this book. My mind was elsewhere, so I found the plot slightly boring. If I picked this up any other time, I feel like I would’ve enjoyed it a lot more. It’s about the return of Grace Melbury from her middle-class schooling. Despite being promised to a simple woodsman, Grace is enticed by the newly arrived doctor. It’s a novel built around disillusionment, betrayal, nature, and moral compromise.

END_OF_DOCUMENT_TOKEN_TO_BE_REPLACED 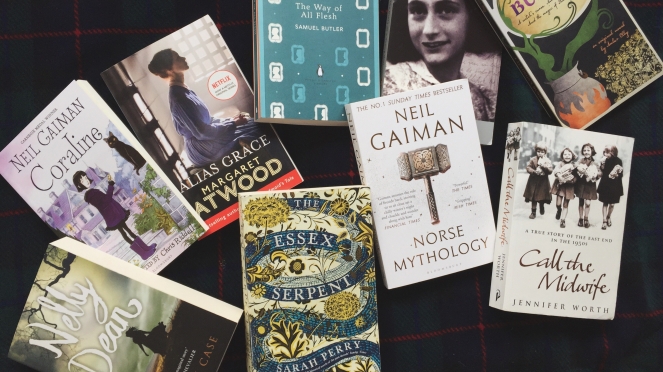 To celebrate my dissertation being handed in, I decided to treat myself to some books. Recently, all I’ve been buying is nineteenth century novels, and, although I love this period, I wanted some variety. These books, in particular, are modern novels that have been sat in my wish-list for an unworthy amount of time. Not only that, but a lot of these are second-hand. Since buying my third year university books second-hand, I’ve come to realise that used books are good. They’re cheap, they’re not always damaged, and they need a loving home. I, for one, can provide that home.

These are the books I’ve picked up (the first five are new, Cauldron’s Bubble was sent me to by the author for review, and the last four are second-hand, if you’re wondering):